Vikings Reviewed in Winnipeg and The Netherlands
by MichaelSchatte.com on October 13, 2015 in NEWS ABOUT MICHAEL SCHATTE

“Opening with the fiery blues of The Rehabilistate, Turn Back the Vikings proceeds down a path that’s both musically interesting and surprisingly engaging. Honey Doll is a bayou stomp, while Pistol On Her Pillow chugs along better than a Colin James workout.”

“…deliciously poignant, both musically and lyrically… Schatte covers [Richard] Thompson’s own ode to a bone collector (Sam Jones) perfectly and proves that, as an artist, he is nearly able to rival the crafty Englishman.”

Schatte is a Canadian guitarist, singer, and songwriter who, in addition to blues, also loves rock, rockabilly, bluegrass, and Celtic music. This year he was one of eight finalists in the Memphis International Blues Challenge and recently won the 2015 Toronto Blues Society Talent Search. Although these are nice mentions, Michael can’t be labelled as a pure blues artist. This would actually belittle his talent. His music is a mix of the most diverse genres, which he puts under the spotlight in a very special way. You might hear other artists with a vague presence of different styles, but Schatte’s are clearly recognizable and traceable.

He pulls out all the stops in “The Rehabilistate,” just like the main riff from “Everybody Needs Somebody To Love” by the Blues Brothers. Schatte wouldn’t be Schatte if he didn’t put in some surprises. And that happens the very moment he throws in a damn good rockabilly solo in an unadulterated Setzer style. A funky approach comes a little later in “Northern Dancer Boulevard” and “Bring You ‘Round.” In “Baby’s On The Border,” varied musical styles really come out after a sublime, clear-sounding acoustic guitar solo. It’s an uptempo song that reminds me of Dr. Hook. The guitar part on “Push, Pull and Swing” reminds me of Tony Joe White. Influences from Celtic folk music adorn the title track, while sixties folk is the basis for “If I Find Love and Leave It Be,” where the folk seal is strengthened through the use of the penny flute. In the boogie “Odessa,” Schatte lets you know in subtle ways that his six strings are influenced by B.B. King.

Not only did Michael appeal to Simon Tassano for the mixing of the album, the man behind numerous recordings of Richard Thompson, he also covered Thompson’s “Sam Jones.” The song about the trader’s skeletons starts acoustically, but after the electric guitar comes in, the lurid feel of the song gets even more depth. Michael’s clear powerful voice, his formidable guitar work, as well as his special feel for bringing diverse styles of music together make “Turn Back the Vikings” a calling card that hopefully will open the doors to international recognition. 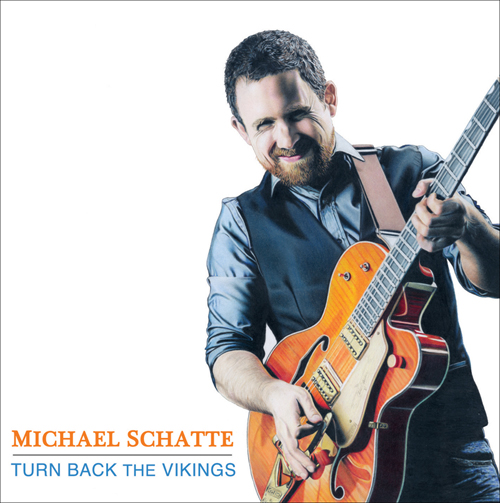