SCHATTE FEATURED IN TWO ACADEMIC PUBLICATIONS
by MichaelSchatte.com on April 15, 2015 in NEWS ABOUT MICHAEL SCHATTE

Michael Schatte has been featured in publications at two fine Canadian academic institutions:

McMaster University: himself a Mac grad, a great article has appeared about Schatte’s music career on the McMaster Degroote School of Business website. Michael completed an Honours Bachelor of Commerce degree at Degroote in 2006.

Centennial College: Michael is on the cover of the Toronto college’s 2015-2016 school program. A part-time guitar instructor in Centennial’s excellent and blossoming Music Industry Arts and Performance program, Michael was surprised and delighted to see his image (and more importantly, that of his beloved Gretsch 6120 guitar!) used for the entire College’s primary promotional publication. Click on the image below to enlarge: 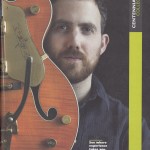